Hello to the subscribers to this blog, or who may be reading this.

It has been over a month since my last entry, and much as transpired in that time from. The title of this entry should give you an idea of what's been going on in my life.

I'm usually listening to tunes on YouTube while writing. But this being a difficult topic for me to address, I've chosen to pause the app for the time being.

Within just days of my last entry, I began to experience severe #suicidalideation for the first time in several years. If you read my previous entry, you should have some idea as to why this mental health malody occurred.

If you can recall, I suffered from a bipolar relapse that had been building for several months, & finally came to head in July. Or so I thought. As the stress levels continued to build, espcially at my job, so did the occurance of vivid nightmares. Plus flashbacks from experiences of bullying in my youth, I thought I'd long forgotten, started to surface. My mind was in such turmoil, I didn't know if I wanted to live or die. I was at the point of wanting to give up.

Then came Monday, 12 August. I'd had a particularly horrendous weekend, and the day wasn't much better. I came home after work that day, and as usual empties my coverall pockets to get ready for a shower. It was then that I pulled something out I never recalled putting into my pocket...a razor blade still in its covering. And, as you can expect since I'd been experiencing suicidal ideation, I was terrified. All I could do was sit in my chair and stare at the 'instrument of death'. I sat there for approx 15 minutes before I could even get the nerve to securely display the item.

Later that evening, I received a text from the Elementary principal checking up on me. He'd seen I wasn't looking good for some days and decided to text me. He let me know that his office always open if I needed to talk. Man, I was glad he said that, for I desperately needed to talk to someone.

So the next morning, after I got the preliminaries done, I made a trip to the other building for a visit with principal. I told the superintendent what I was going to do, and gave him an indication for the visit. But, it didn't seem to register with him at the moment.

I made to the office, sat down behind a closed door and spilled my guts. I literally broke down when I mentioned the razor blade to him.He was very compassionate and, as I mentioned beforehand, had genuine concern for my well being. How much I didn't find out till the next morning.

Come Wednesday morning. I was struggling severely. I was undergoing a mixed episode of anxiety, depression & hypomania. I mentioned of my malady to a secretary, but didn't think much about it until I was called into the superintendent's office.

He sat me down, asked me what was going, & it was then that I spilled my guts once more. Apparently, the principal had made mention of our discussion the morning before & decided an intervention was in order.. I told him that things were getting unbearable, and I was at the point of giving up. He asked me if he could call my GP upon my behalf & get my next appointment move up I said yes, because I was at crisis level. The appointment happened the next afternoon.

I went in to the appointment full of fear and anxiety. Before my GP entered, the nurse asked me questions and seemed to not believe me about the razor incident. The GP decided that everything was out of her hands now, and referred me to a psychiatrist. The appointment was scheduled for the following Wednesday. Before leaving, she prescribe another med to help take the edge off till my appointment. She went as far if I needed to go for evaluation for my safety. I assured her that I had people checking up on me and would be alright.

Psych Day, 21 August. Had to be there early to get paperwork filled out. So thankful that my sister took me, because I was so anxious it would've been hard for me to fill out the paperwork.

Eventually the nurse called me and did the preliminaries. Asked me the usual questions of psych patients. She took my vitals & weighed me. I found out that I'd lost 11 lbs since 08 July. Too much in such as short time. She then led me back to the waiting room to wait to be called in by my psych.

Once again, when called in to the psych's office, she reasked the same questions of me, then let me spill my guts. It was during the session that she tacked PTSD on to my list of mental health issues, reconfirmed my BMD 2, generalized anxiety along with social anxiety. She then prescribed all new meds. Four in all. An antidepressant, mood stabilizer, one for nightmares, and a PRN for anxiety. Then asked me to return in 2 months for a followup.

I am so grateful that I went to the psych. It was the first time I'd ever been able to open up to a mental health specialist.

I cannot say that things are a bed of roses, for they are not. I have had both good and bad days. Still experience mixed episodes & have times when my PTSD is triggered. All has to be expected until I get adjusted to my new meds. It's only been two weeks, & it may take another 2 to 4 weeks for me to get the full effects of them.

Now on to this week.

This has been an especially hard week for me. This Tuesday past, was the 12th anniversary of my father's passing. My dad was my rock. And since I'm in recovery mode, it made things especially difficult for me.

I've also been journaling in earnest. Most of my journaling involves writing poetry & letters to myself. So long as I can get things out & have records of how I've been feeling, it is a great release.

Also this week, I the ball got rolling for me to see a counselor. My sister & I took paperwork to NW Center for Behavioral Health in Fairview, OK. The desk clerk received my paperwork, asked for pertinent information, then went to consult with the counselor. Apparently, something in my paperwork caused her concern.

The counselor called me in, and once again she asked me questions and allowed me to spill my guts once more.She also wanted assurance that I would have people looking after my safety, or else she would have no choice but send me to inpatient. I gave her my assurance, then she allowed me to return home.

I go for intake Monday next. Intake involves making sure I get all the services I require due to my mental health situation, i.e...psych, counselor, med service & social worker. No bases will be left uncovered. I was also informed, that after I met with their psych, I was under no obligation & could continue seeing my other psych. I asked if I needed to cancel my other appointment, and they said to keep it for the time being, for it could be after that date before say their psych.

I'm sorry for such a long entry. But at least the ball is rolling in right direction for me to get the help I need, in order to enhance my road to recovery. Yes, it's going to be a long & hard journey, but with support I'm getting, I shall make it. I will not give up. 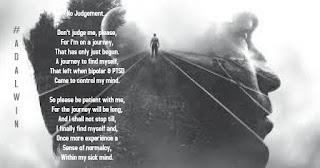 It is my hope, by writing about my mental health journey, someone will read it and come to realize that there is hope even in the darkest of nights. I also ask, that if at any time you find yourselves struggling & at the end of your ropes, to reach out for help from friends, family or call a suicide crisis hotline in your area. The help is there if you need it. JUST REACH OUT. YOU DON'T HAVE TO SUFFER ALONE.