WE REMEMBER. WE WILL NEVER FORGET.

Welcome back to another edition of 'Simply Alvin'. I hope, where ever you may live, you are having a beautiful day/evening/night.

Many things have gone on in my life since my last posting a week ago. I have had several things going through my mind upon which to write about. But, as fate would have, the memory of April 19, 1995 has taken center stage. For it was on that day, 20 years ago today, Wednesday, April 19, 1995, bent on indignation towards the Government of the United States, Timothy McVeigh parked a Ryder rental truck in front of the Alfred P. Murrah Federal Building in Downtown Oklahoma City, OK. The bomb laden truck exploded at 9:02 that morning, destroying the building and damaging several structures in the downtown area.

One hundred and sixty-eight innocent lives were lost that day, of which 19 were children amongst them.

Wednesday, April 19, 1995, was, and still is considered, 'The darkest day' in the history of Oklahoma City and the State of Oklahoma. It was also, up to that time, the 'worst' act of terrorism on American Soil.

It has been said that time will heal, But, for many of the survivors and loved ones of those lost in this senseless act of cowardice, time has not completely healed the wounds.Not even after 20 years.

It is hard to express in words my sentiments. So, I share with you the following verse, attributed to 'Adalwin'. 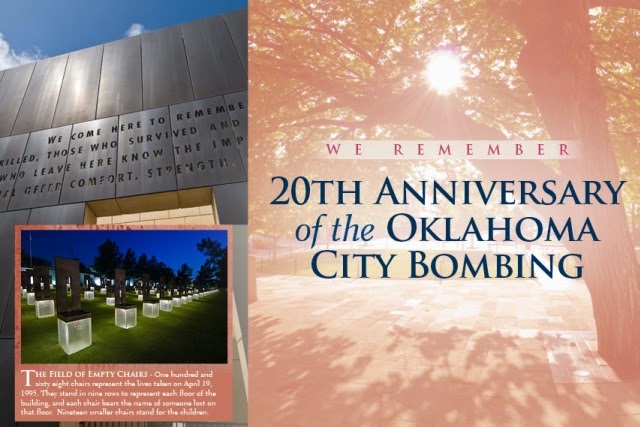 "April 19, 1995 - 9:02 AM:
Precious lives were taken that day. An act of cowardice and hate. Bent on indignation, a bomb laden truck blew up that day, ending the lives of 168. Tho the wounds may never completely heal and leave a scar upon the soul, we move on and make a vow, 'WE REMEMBER. WE WILL NEVER FORGET.' For the day such a tragic event is forgotten, is the day that history is destined to be repeated."


Til next time, I extend to you my LOVE and best wishes.

Posted by Simpy Alvin No comments: